Anyone who has read their share of science fiction and fantasy knows that war is a large part of the genre. Every story needs a catalyst, something that sets the characters in motion and gives them a conflict to push against. War stories can be an easy way to put your characters in danger, give your story a high stakes outcome and create drama. But as common as war stories are in SF and fantasy, most of the most famous stories are about men going to battle. This is perhaps not surprising as in our own world it is only very recently that policies were put in motion to allow women to official hold combat roles. The major wars of the past were fought by men, and that inevitably trickles down into our literature – even our imaginative literature.

BUT. There have always been some authors who imagined female warriors. Imagined women who fought in battlefields along side men and risked as much as any soldier. Some of my personal favorite stories of battle have a kick-ass woman or two in the mix and a memorable few are all about those fierce women warriors. And while there are many, many dangerous women in fiction, I’m going to focus on the professional soldiers here, not the ones who kill people as a hobby. Here are a few of my favorites, but feel free to tell me about your favorites in the comments.

Paksenarrion Dorthansdotter
Paks is by far, by miles and miles, my favorite female soldier. She came from a small village, the daughter of a sheepfarmer, and at eighteen she is pressured to marry. Paks wants more from life than to wed a man who smells of sheep and runs away, choosing to join a mercenary company and learn to fight. The author apparently has a military background (US Marines, if I recall), which might be why this series always rang so true in all the little details of a soldiering life – the hard training, the grueling marches, the terror of battle. These books are thrilling and exciting, but also deeply emotionally engaging. I think I cry at least once every time I read them. I can’t imagine any fan of epic fantasy not enjoying these. If you don’t like them, don’t tell me. I want us to still be friends.
First seen in : Sheepfarmer’s Daughter

and her world is further explored in many sequels and prequels.

Devi Morris
You have to love a girl who names her guns. Devi is a soldier to her bones, likes sex but not relationships, and has a deep emotional attachment to ber powered armor. I love her. In her first outing, she takes a job with a hard-fighting mercenary crew in hopes it will fast-track her to a spot on the Devastators, the elite royal guard of Paradox. The job on the Glorious Fool is more dangerous than even Devi anticipates and her relationship with one of her secretive crewmembers could be a distraction. But even though this series has a great romantic angle, Devi stays true to herself.
First seen in: Fortune’s Pawn (Paradox, Book 1)

Catherine
I read the first book in this series, Germline, and enjoyed it quite a bit. For military SF fans it gave an interesting spin by having the protagonist be an embedded journalist on the front lines of a future war. But the hero was more unlikable than I usually enjoy in that volume. You would think the switch in book 2 to a cloned “germline” warrior would be an even less relatable protagonist, but I really bonded with Catherine. She and her “sisters” were created to be fodder in a long war fought in central asia. The clones are engineered to be the ultimate solider, created to only last a couple of years, and are meant to break down and be replaced. But they are not machines, and Catherine questions everything about her existence, including why she has to die.
First seen: Exogene (The Subterrene War, Book 2)

by T. C. McCarthy
Two other standalone novels in the series explore other aspects of the wars Catherine fights: Germline 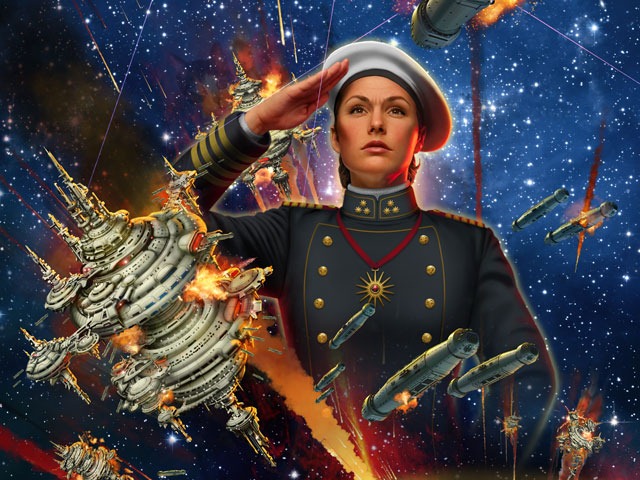 Honor Harrington
Honor is one of an always growing sorority of space opera heroines (Ky Vatta and Kris Longknife are two others), and she remains one of the best. An officer in the Royal Manticoran Navy, Honor moves up through the command ranks in this series due to her tactical skills, first exhibited in On Basilisk Station, when she has her first command. The series often focuses on naval and stellar politics, rather than bloody ground battles, but the action scenes are always well done.
First seen in: On Basilisk Station (Honor Harrington, Book 1)

by David Weber
Also seen in 12 more books (so far) which star Honor and there are a slew of books set in the same universe with other protagonists. 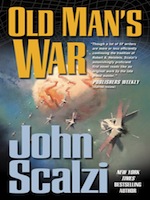 Jane Sagan
I’m a big fan of John Scalzi’s Old Man’s War. The focus of that series is undoubtedly John Perry, but I think the character of Jane helps give the series depth and heart. The premise of the series is that senior citizens can join the army and get new bodies if they agree to fight for the Colonial Defense Forces. John Perry does just that after the death of his wife Kathy, and is trained to fight the CDF’s wars. He meets a fellow soldier, Jane Sagan, who was grown using the DNA of his dead wife, and that initial bond grows into a deep new relationship with the different woman that Jane came to be. The two balance each other, and Jane is a great character. Unfortunately, the novella that Scalzi wrote from Sagan’s POV is better skipped, as I prefer the characterization we get from the main series.
First seen in: Old Man’s War

by John Scalzi
Also appears in The Ghost Brigades

and The Sagan Diary

is another book set in the same universe

Aerin
The legendary Aerin Dragon-Killer starts out as the rather shy daughter of the king of Damar. She’s rumored to be a bastard and shunned by the catty women of the court. She kickstarts her legend in part one by killing a small dragon (after learning how to make an ointment that protects her from fire) but goes on to face even bigger dangers. With all the boy adventure stories in fantasy, this (and th Blue Sword) was the first great girl-lives-up-to-her-magical-destiny book I read and it holds up remarkably well. Give to every young girl in your life.
First seen in: The Hero and the Crown

by Robin McKinley (but talked about in The Blue Sword

, which good gravy you should definitely read too)

Monza Murcatto
The grimdark genre is really just epic fantasy with less magic and more blood and swearing, and one of its best practitioners is Joe Abercrombie. While his First Law Trilogy is awesome, the female characters don’t really have much agency of their own. That changes with Best Served Cold, which is set in the same universe but focuses on mercenary captain Monza Murcatto, betrayed and left for dead by her employer, Duke Orso. BIG mistake. She assembles a crew of assassins, criminals and fighters to help her take out Orsoa nd the others she holds accountable. Revenge stories are old skool in fantasy, and Abercrombie takes this one to bloody, violent extremes. Good stuff.
First seen in: Best Served Cold

by Joe Abercrombie
Also mentioned in The Heroes 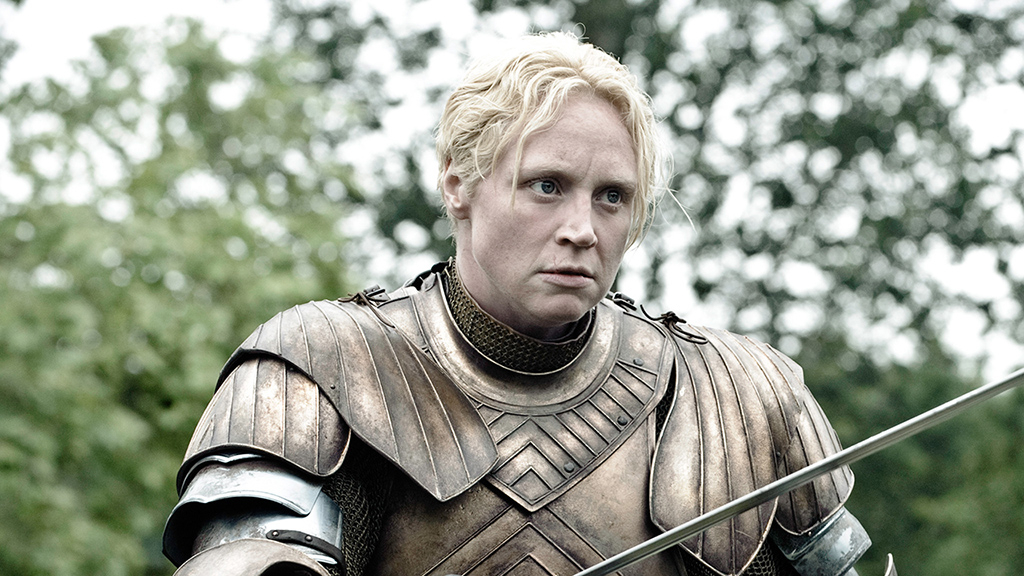 Brienne of Tarth
I will admit here, in front of the world, that I haven’t read all the books of George R. R. Martin’s A Song of Ice and Fire. I read the first three, and they are marvelous. But I got tired of waiting and re-reading and waiting some more. So I will read them all when the end is a little closer and until then I have grown to love the TV series. Although there are many strong women in the TV series, Brienne is the one real professional soldier in the series. And she’s awesome. Huge, hulking, not considered particularly attractive, she excels as a swordswoman. She has a vulnerability that shines through in the performance by Gwendoline Christie.
First seen in: Game of Thrones: Season 1

Also appears in A Clash of Kings (A Song of Ice and Fire, Book 2)

(where apparently she is one of the POV characters), and A Dance with Dragons (Book 5) 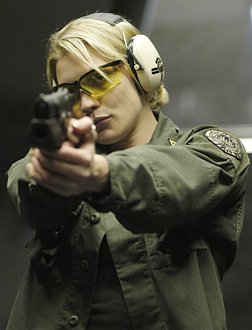 Starbuck
I love that the remake of Battlestar Galactica took a macho, sexist character and gender-flipped it. But cleverly, Starbuck is still macho, love-’em-and-leave-’em when it comes to sex, hard-drinking and the best pilot in the fleet. I hate what the show did to the character in many ways in later seasons, but she starts out as this marvelously complex character. She’s prickly and difficult, beautiful but completely unconcerned about her looks, and the best at what she does. The credit for all her interesting facets and edges goes to actress Katee Sackoff who made her interesting to watch even when the writers did terrible things to her character.
First seen in: Battlestar Galactica – Season One

But if you want to see the whole crazy arc: Battlestar Galactica: The Complete Series

Del
I’m a little afraid to re-read this series, as I loved it to pieces 30 years ago (yikes!). Influenced by sword and sorcery greats like Fritz Leiber, the series focuses on Tiger, a swordsman from the south and Del, a northern sword singer. In book one, Del hires the legendary Sandtiger to help rescue her brother, being held in the South. But Del isn’t just around to pay the bills, she is a just as talented in her own sword tradition as Tiger. The two learn from each other over the series and yes, there is some romance. But I remember loving Del, and cheering every time she shows the sexist Tiger that a woman can be talented and dangerous as any man, forcing him (a little) to get over his macho self.
First seen in: Sword-Dancer (Tiger and Del, Book 1) 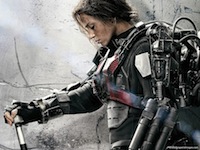 Rita “Full Metal Bitch” Vrataski
I never read the graphic novel, but I understand it sticks pretty closely to the plot of the movie. The focus for the film is of course Tom Cruise’s character William Cage, involuntarily drafted into the war against an alien menace, but every time Emily Blunt was on screen you just can’t look away. She plays a legendary warrior, known as the Rita Vrataski – aka recruitment poster icon “Full Metal Bitch” – who has killed more alien mimics than any other soldier. I won’t give away any of the plot, but watching Rita train is a thing of beauty. She is a tool in the film to get the character of Cage to the point where he can do what he’s meant to do, but I found her completely compelling on her own.
First seen in: All You Need Is Kill

by Hiroshi Sakurazaka
Also appears in: Edge of Tomorrow

HONORARY MENTION
Cordelia Naismith (Countess Vorkosigan)
Although I love her son Miles more than just about any other character in SF, Cordelia is amazing in her own right. She was captain of a Betan exploratory vessel before coming to Barrayar, and fought alongside Aral when necessary, but she was never a soldier by choice. Not that I would cross her if I were you.
First seen in: Shards of Honor

), and appears frequently in many other volumes of the Vorkosigan Saga.

Leia Organa
A diplomat by profession, Princess Leia certainly proved she can hold her own in a fight. While she spends a goodly portion of the series getting rescued, Leia has agency of her own, especially in Return of the Jedi where she takes care of Jabba and help lead the rebels in the final battle.
First seen in: Star Wars

(I can’t call it Episode 4, sorry), also seen in The Empire Strikes Back

and Return of the Jedi