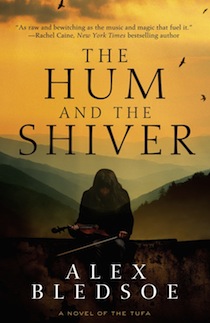 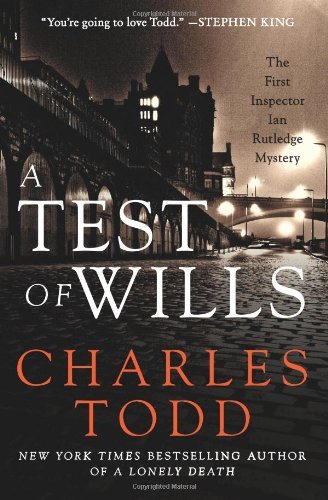 THE BOOK: In this series of historical mysteries set in post-WWI England, the protagonist is a Scotland Yard detective who solves crimes despite being nearly crippled with shell shock. Charles Todd’s Inspector Ian Rutledge is one of the great characters of British crime fiction. He fought in the trenches of WWI France, and came back a shattered man, carrying the guilt of what he had seen in the war. The twist is that his guilt takes form as a very convincing delusion. Rutledge hears the voice of a man who died under his command. This voice, a Scottish officer called Hamish MacLeod, serves as Rutledge’s conscience. It is also the voice of his intuition, which he fears he lost in the war.  But the hook for mystery fans is that Rutledge is trying to pick up his work as an Inspector with Scotland Yard. END_OF_DOCUMENT_TOKEN_TO_BE_REPLACED 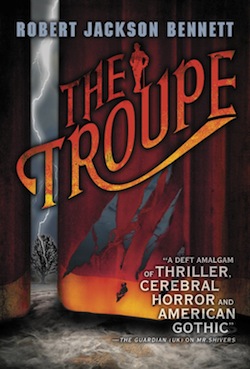 THE BOOK: In an undefined turn-of-the-last-century time when vaudeville was still going strong, we meet young George Carole, a piano player at a small Vaudeville theatre in the middle of America somewhere/nowhere. Sixteen-year-old George is working at Otterman’s theatre for only one reason:  he hopes his father will play there someday so he can finally meet the man. But when he does finally track down his father’s vaudevillian troupe, nothing goes as planned.  His father, Hieronymus Silenus, is involved in something bigger and scarier than a simple entertainment and when George see the Silenus troupe play, his life is changed forever. Between the creepy puppet act, the tantalising dancing of the beautiful Colette, and the mesmerizing song that ends the act, George is fascinated.  But it is his encounter after the show with a spooky gray man who sucks all the light out of the world around him that decides George to sign on with the Troupe. Because Silenus is somehow using his show to battle back all the evil of the world.  Or is he? END_OF_DOCUMENT_TOKEN_TO_BE_REPLACED

THE BOOK:
Darian Frey captains the airship Ketty Jay, scraping up jobs of dubious morality and legality but usually staying on the lawful side of piracy. The crew of the Ketty Jay are of dubious morality as well, each hiding secrets and running from the past. When Frey takes a job to hijack a trunk of gems from another airship he know this is both bigger and more illegal than anything they’ve pulled before, but the payday is too good to resist.  When everything inevitably goes wrong, Frey and the rest of the Ketty Jay crew will face piracy and murder charges. They need to find who set them up if they want to survive to fly another day. END_OF_DOCUMENT_TOKEN_TO_BE_REPLACED

THE BOOK: As the new STARZ adaptation gets going, I’ve been thinking a lot about these books. When I first read Outlander (and I came late to the party, only reading this first book after many of the sequels were published), I had the series recommended to me by several people.  What I remember is that the recommenders took completely different tacks in their pitch. END_OF_DOCUMENT_TOKEN_TO_BE_REPLACED

THE BOOK: Searching for a way to get noticed and get a spot with the Devastators, the elite king’s guard of Paradox, Devi Morris takes a security job on the most dangerous trading ship in the region, The Glorious Fool.  It doesn’t take long for Devi to realize why one year with this ship counts as five years with any other trader.   END_OF_DOCUMENT_TOKEN_TO_BE_REPLACED

THE BOOK: In the near future the city of Pittsburgh has been destroyed in a nuclear blast, and even though John Dominic Blaxton was out of town when the bomb went off, he never recovered from the loss of his wife. Ten years after the tragedy, the Pittsburgh Archive is a digital recreation of the city and its people that serves as a virtual environment survivors and tourists alike can visit.   END_OF_DOCUMENT_TOKEN_TO_BE_REPLACED

THE BOOK: Will Laurence is the Captain of a British frigate fighting Napoleon’s French Navy in the Mediterranean. He captures a French ship that happens to be carrying an unhatched dragon egg. It turns out that in Novik’s alternative world, dragons are used by the military to fight aerial battles. END_OF_DOCUMENT_TOKEN_TO_BE_REPLACED

THE BOOK: Amelia Gray is a young woman with an unusual job: she restores cemeteries for a living. Working in and around her home base of Charleston, she has built up a reputation as an expert in meticulous restorations of historic burial places. She learned the trade from her father, and grew up watching him work as a caretaker at a local cemetery. But it appears she inherited more than a professional aptitude from her father. END_OF_DOCUMENT_TOKEN_TO_BE_REPLACED

THE BOOK:  Seraphina “Finn” Sullivan and her father have moved back to the small college town on the Hudson River where her father grew up, in part to get a new start after the suicide death of Finn’s sister Lily Rose. END_OF_DOCUMENT_TOKEN_TO_BE_REPLACED