I am sure there are many readers who would swear on a stack on bibles that they don’t read horror, but who might read certain horror that sneaks onto the bestseller lists or gets literary love.  I thought, in honor of Halloween and All Hallow’s Read (you know– the super-fantastic tradition that Neil Gaiman invented where everyone gives someone a scary book for Halloween?), I would highlight some books that are fantastic horror novels that for one reason or another are read far beyond the normal genre audience for horror.  Sometimes these are books by well-respected literary novelists who are dabbling in a darker hue; sometimes they are subtle horror novels that skirts the edges of the genre. They might be as scary as anything Stephen King ever penned, but they sit on our “literature” shelves rather than in the horror ghetto.  These scary books have gotten a lot of critical love and might be just the thing to give someone who doesn’t think they read horror. 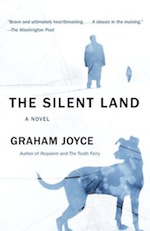 I’m giving Joyce top spot because a) I love his books and think he was an amazingly talented writer who writes horror novels that often don’t get a horror label and b) he died a few weeks ago.  I haven’t read Joyce’s last book, The Ghost in the Electric Blue Suit

which by all accounts had th author’s light supernatural touch and also got great reviews. In Joyce’s fantasy and horror novels, readers who don’t usually read genre can explain away the supernatural elements if they wish. But even if it is subtle, the otherworldly elements are there. I don’t want to give away too much of the plot to The Silent Land, as much of the enjoyment comes from the build up of knowledge. It begins as Jake and Zoe Bennett get caught in an avalanche while sking at a Swiss resort. They dig themselves out, only to be confronted with an empty, presumeably evaculated town, the threat of further devastating avalanches, and no way out of danger. It’s haunting. 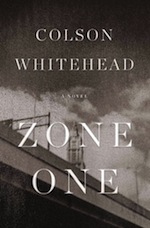 ). In this, his most recent novel, he takes on the worn out genre of the zombie apocalypse, giving it new life (pun intended). In the aftermath of the pandemic of a zombie plague, Mark Spitz and his squad of “sweepers” move through the eponymous Zone One of lower Manhattan, one of the protected, walled-off enclave meant to house the uninfected. Spitz and his crew are clearing the zone of zombie stragglers, but the real picture Whitehead paints is of the lonliness and despair of people living after the end of the world. It’s bleak, but full of dark humor and satire on pop culture — not an easy balance to achieve. He’s a gorgeous writer. 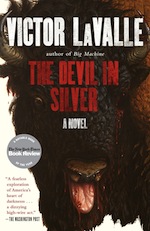 The Devil in Silver

I’ve always found mental institutions irrestible settings for scary stories. First, in books and films they are often decrepit and corrupt institutions that prey on human misery. But there’s the added bonus that the inmates (patients) are not the most reliable of narrators, being crazy and all. In LaValle’s creepy take on the genre, Pepper is a violent man who is involuntarily committed for a psychiatric hold. In the hospital he encounters a patient and/or creature who drops down from the ceiling tiles in the night and is known by the other patients as the Devil. This belongs in that category of horror where the human misery is just as scary as the possible inhuman threat. You never really know what to believe while you read this one, and that unease helps keep the tension high even while the pacing remains slow. 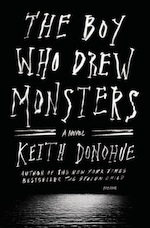 The Boy Who Drew Monsters

, and he delivers another genre bender with his latest. Children can be excellent central characters for horror, as the line between fantasy, nightmare, and reality is so much more porous for an imaginative child. Ten-year-old Jack Peter Keenan has Asperger’s and lives much of his time in his own private world, especially since he nearly drowned a few years earlier while swimming with his friend Nick. Jack Peter now refuses to leave the house and draws increasingly disturbing pictures of monsters he says are waiting outside for him. Nick and his parents notice a correlation between Jack’s pictures and unexplainable phenomena that start occuring around him. Spooky, psychological horror for the literary crowd.

A werewolf plagues by existential ennui would seem like an unlikely recipe for a bestseller, but Duncan’s supernatural thriller won over both horror and literary fans. Jake has tired of 200 of years of existence as a werewolf and is considering packing it in when enemies old and new give him a reason to fight again. In its language and visuals this one is, hmm… earthy? Is that the word I’m looking for? It’s *really* gory for the literary crowd. But beautifully written violence! And the way Duncan tackles real human issues of loneliness, aging, love and violence is moving. This works as a thriller, as horror and as a brawny literary novel as well.

Because this came out when all things bibliothriller (thanks Da Vinci Code!) were hot, I think it got a broader audience than might otherwise be expected.It starts with a young woman who finds an old book and some letters that seem to hold clues to not on her own family’s secrets, but a bigger secret as well. This historical treasure hunt take on Dracula has an inventive structure, plenty of exotic locales, some time-hopping action, and a well-researched history of Vlad the Impaler, source of the Dracula myth.It’s not as literary as some of the things on this list, but certainly would be an easy gateway drug to the horror world for those not usually into the whole vampire scene. 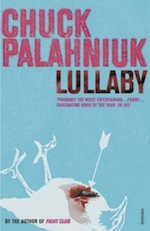 Bad boy of the literary world, Palahniuk has several books that dangle on the edges of the horror genre. Other than Fight Club: A Novel

, I can’t really claim to be a huge fan. He’s one of those guy’s guy authors (Dave Eggers is another) that just doesn’t speak to me, but I know that he has HUGE numbers of fans of both genders. This one always intrigued me and I’m sure I’ll get around to it one of these days. From Amazon: Carl Streator is a reporter investigating Sudden Infant Death Syndrome for a soft-news feature. After responding to several calls with paramedics, he notices that all the dead children were read the same poem from the same library book the night before they died.

From a lab experiment gone wrong that causes a vampiric pandemic, this book starts off with a bang and just gets more tense and gruesome. Cleverly, Cronin doesn’t dwell overlong on the outbreak but jumps his story ahead to a future where the remnants of humanity are barricaded against the vampire hordes. It’s brutal and hopeless until the survivors find Amy, a young girl who has been living out among the monsters without becoming one. Is she immune? Is she the key to humanities survival? I loved this when it came out, read it in one long sitting, but never really felt the need to read the sequels. Cronin earned his litfic laurels before penning this series, which might be one reason it had widespread appeal.

Let the Right One In

Made in a marvelous movie in the author’s native Sweden (and an apparently decent American remake a few years later — although really, why?  Are Americans completely incapable of watching a movie with subtitles???), the novel is bleak and dark as a Scandinavian winter night. Loosely structured like a coming-of-age story crossed with  vampire horror, it has more nuance and twists than I ever expected. It’s also almost unbearably sad, in the way that only stories with damaged children can be. Most people came to the book after the film became an arthouse favorite, which might be one reason this was also a hit with literary fiction fans.

This is the horror novel to give your hipster friends. It’s really two parallel narratives, one in the main text, one in the footnotes. It’s a book about a man, Johnny Truant, who finds the notes for a book written by a dead blind man about a documentary film. The documentary is about a bizarre house that shifts and changes in inexplicable but menacing ways. Truant falls deeper and deeper down a rabbit hole as he untangles the notes and becomes obsessed with the movie it describes. Very meta, absolutely original, this nested haunted house/haunted book story is a love or hate it proposition.

So Cold the River

Before he turned to the spooky stuff, Koryta had built a nice body of work as an author of thrillers. But starting with So Cold the River (and followed by unconnected but equally eerie horror/thrillers The Cypress House

) Koryta kept the thrills, but added supernatural chills as well.  This one has a filmmaker travelling to a resort town in Indiana famous for its healthful waters. He’s supposed to film a documentary about a local resident but when he drinks from a bottle of the local waters he starts down a dark, twisted path.  This would be a nice horror intro for thriller fans.

Country doctor Faraday is called to see a patient up at the Hall, home of local gentry the Ayres family. Although the home has fallen from its days of grandeur, is it actually haunted? Waters writes gorgeous period pieces and this snapshot of the post-war 1940s is another, but with the added bonus of a genuinely creepy set of ghostly phenomena.  An easy sell to historical fiction fans, as it does a great job with the period and its class-consciousness, but with a great spooky atmosphere and an unreliable narrator to keep things on edge. I love Sarah Waters.