Wake of the Bloody Angel by Alex Bledsoe
The series of novels featuring sowrd-for-hire Eddie LaCrosse are always fun, and all feature action and swordplay.  It was inevitable, I suppose that he would cross paths (and swords) with pirates one day.  That day arrives when the woman who runs the bar where he has his office asks him to find the pirate she loved and lost. His ship, The Bloody Angel, disappeared years ago and Eddie enlists the help of a pirate queen to search for the pirate’s fate. This series is funny, fast and a little ridiculous, but in a good way.

Ship of Magic by Robin Hobb  Top Pick!
In Hobb’s vivid fantasy world, Liveships are made from wizardwood that quickens over time until the ship is sentient. Althea Vestrit is dismayed when her family’s liveship Vivacia passes to her sister upon her father’s death instead of to her. Her sister’s foreign husband plans on using the ship for the slave trade and refuses to allow Althea on board until she gets sailing experience. But meanwhile, pirate captain Kennit plans to seize power over the Pirate Isles by capturing a liveship and bending it to his will. This barely scratches the surface of the complex plot that started a new series of exotic epic fantasy called Liveship Traders from the marvelous Robin Hobb.

Sword-Born by Jennifer Roberson
Although this is the fifth book to feature couple Tiger and Del, I think you could jump in here even though you would lose some of the pleasure of watching their relationship build. The two master swordwielders are exiled both from Tiger’s usual stomping grounds in the South and Del’s Northern homeland so they decide to take to the seas to find Tiger’s homeland, believed to be the island of Skandl. Of course they are shipwrecked and attacked by pirates. I adored these books when I read them in high school.

The House of the Four Winds

by Mercedes Lackey
The rulers of the small kingdom of Swansgaard have one son and twelve daughters, with no money to pay a dozen dowries. Eldest girl, Princess Clarice decides to make her own fortune; disguising herself as a boy and taking passage on a ship to the new world. When the crew of the ship mutinies, Clarice (now Clarence) sides with the mutineers and agrees to help leader Dominick find the secret pirate haven The House of the Four Winds. This one is a light romantic fantasy with a fairytale feeling.

by Gene Wolfe
A young priest fresh out of seminary with a complicated past, Father Christopher finds himself inexplicably swept back in time to the 18th century, where he finds himself caught up in the life of a buccaneer on the Spanish Main, sailing the Caribbean in search of Spanish gold. Wolfe is a wonder of a writer, although the fantasy elements of the story look like they are limited to Chris’s inexplicable jumps through time.  I haven’t read this one, but it sounds like fun.

The Fox  by Sherwood Smith
In this second novel to feature Prince-in-exile Inda, the boy is forced to flee the capital and hide aboard a pirate ship. Even at thirteen, his natural talents and training in military strategy will help him to gain his own mercenary fleet. As he battles pirates, the spectre of his old life in Choread Elgaer seeks him out again as he has become the heir to the realm. Rich in characterization as well as action, Smith books can be enjoyed by teens or adults.  There is some pirate action in the rest of the series as well, so it’s probably best to start at the beginning at read them all!

Child of a Hidden Sea

by A M. Dellamonica
I won’t lie — when I saw the cover I hoped there would be more pirates. Sophie Hansa is in San Francisco one moment, searching for her birth mother, and the next she is in the watery world of Stormwrack. She must find her way in this foreign world, sort out the place of her birth family in the local politics, and rescue her foster brother who has been kidnapped by pirates (THERE they are!). The world of Stormwrack is fascinating, and hopefully Dellamonica will visit again soon.

Tome of the Undergates   by Sam Sykes
Lenk is the leader of a band of unsavory mercenaries, viscious and greedy and willing to take any job as long as the money is good. He leads by virtue of being the only one who can keep them from killing each other. Their latest job is to guard a priest and the book he carries on a sea voyage. They are attacked by pirates and discover that the job they took for the money was a lure that dragged them into a much larger and more dangerous conflict. This is the opener for Sykes series Aeon’s Gate.

The Bird of the River

by Kage Baker
Those saddened by the death of author Baker in 2010 received the gift of a final book in the series that began with The Anvil of the World. The whole series is marvelous, but this last volume includes bonus pirates! When their addict of a mother drowns, teenagers Eliss and her half-brother Alder join the crew of a river barge. Coming-of-age story, adventure, and even a little romance make this a fantasy that teens and adults would both enjoy.

by Tim Powers Top Pick!
The Pirates of the Caribbean franchise borrowed from Powers’ 1987 classic of adventure, magic and piracy. In 1718, John Chandagnac, a bookkeeper and puppeteer, is sailing for Haiti to take back his inheritance when he is captured by a ship crewed by zombies. The waters of the Caribbean are ruled by psychotic pirate Blackbeard, and John gets drawn into Blackbeard’s world of sorcery, voodoo and the search for the Fountain of Youth. It’s a great story in its own right, and of course, it gave us another cinematic adventure of this guy: 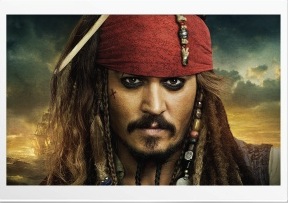