I recently decided to chart another genre, this time post-apocalyptic fiction. I love the genre, which has more variety that most people suspect. Why do we love books about the end of the world?  In a way, it is the ultimate triumph-over-adversity narrative. Whether ante-, mid- or post-apocalypse, the end of the world as we know it is a pretty good conflict for characters to strive against.  Usually characters are a big part of the appeal in apocalyptic fiction. You need characters you can root for to SURVIVE. Readers like to imagine how they would behave in the world possible scenario of a world-ending catastrophe, and these books can showcase the best in humanity, while it usually also shows us a vivid portrait of the worst we can do to each other.

What’s the genre?  The genre for apocalyptic and post-apocalyptic novels is usually Science Fiction. The reason for this is that the books are looking at our world and wondering what if? What if the seas were to rise? What if disease were to sweep the earth? What if we poisoned the world with nuclear fallout? Another genre that these books often share is the thriller.  Racing for survival can be pretty tense, and the post-apocalyptic category has its fair share of pulse-pounding page-turners. Interestingly, the books are not always marketed as SF, and are in fact read by lots of people who would claim not to like SF. Recent post-apocalyptic books like The Road by Cormac McCarthy,The Dog Stars by Peter Heller or Station Eleven by Emily St. John Mandel are marketed squarely as literary fiction. When the world ending apocalypse is caused by a monsters like the vampires of Richard Matheson’s I Am Legend or the zombies of Max Brooks World War Z, the book is usually classed as horror. Whatever the base genre that gets slapped on the cover of the book, apocalyptic books have a lot of potential for blending. Books like Ben H. Winter’s The Last Policeman layers in the mystery genre, and quite a few books manage to fit a romance in around the world ending, especially on the teen side of things. Speaking of which…

Teens always think it’s the end of the world, right? When I started collecting these novels together in a spreadsheet and dividing them into their particular flavor of world ending, I did notice that teen books are HUGELY present in the genre.  And to me that makes sense: the world is out of control, the stakes are high, and especially in teen Post-Apoc there is usually a satisfying win for humanity. This is a narrative that appeals to teen, who often feel out of control of their own lives. And no matter how awful the world is, two attractive young people can find a way to turn it into a love story.  In adult Post-Apoc, you are less likely to get that win, and the worlds they leave the reader in can be pretty bleak.

When the real world is scary, post-apocalyptic books come in droves.  The other thing that I noticed was that these books reflect the real fears we as a society are grappling with. Nuclear war books dominated in the 1960s, but we hit a slightly more optomistic patch in the 1970s and 80s. Reflecting the fears of recent decades, today’s apocalypse is much more likely to start in a lab and end in a plague.  Environmental collapse is an ongoing theme and continues to be steadily used in post-apocalyptic literature, showing that this is a consistent fear for society. The sheer number of post-apocalyptic books that have been published in the last ten years seems to mirror the unease that Western society, especially America, has about the future.  Rough economic times, political divisiveness, and outbreaks of deadly diseases feeds this literature as surely as the general trend in publishing up putting out more and more of the same stuff that sold well five years ago. But that’s another rant.

Dystopia?  While I love the related genre of dystopia, there were just so many books out there that I decided to only include dystopias if they were clearly, narratively caused by an apocalyptic event.  Some of these I was stretching for, admittedly, but I think it works, mostly. For example, The Handmaid’s Tale, 1984 and Fahrenheit 451 are great dystopias. They feature future societies that have taken radically different paths than our own history to a dark, dark place.  But if the book never says (or at least implies) there was a game-changing world event that led us to that dark place, I left them off.

Apologies in advance for the huge file. I made it lower res to not choke WordPress, but I didn’t realize when I started just how many books I would find! I’ll round up some of my personal favorites in another post. If you want to see them in a chart, I’ve linked to my working google document here.  But for the graphically inclined, here the chart. You can click on the image to embiggen! 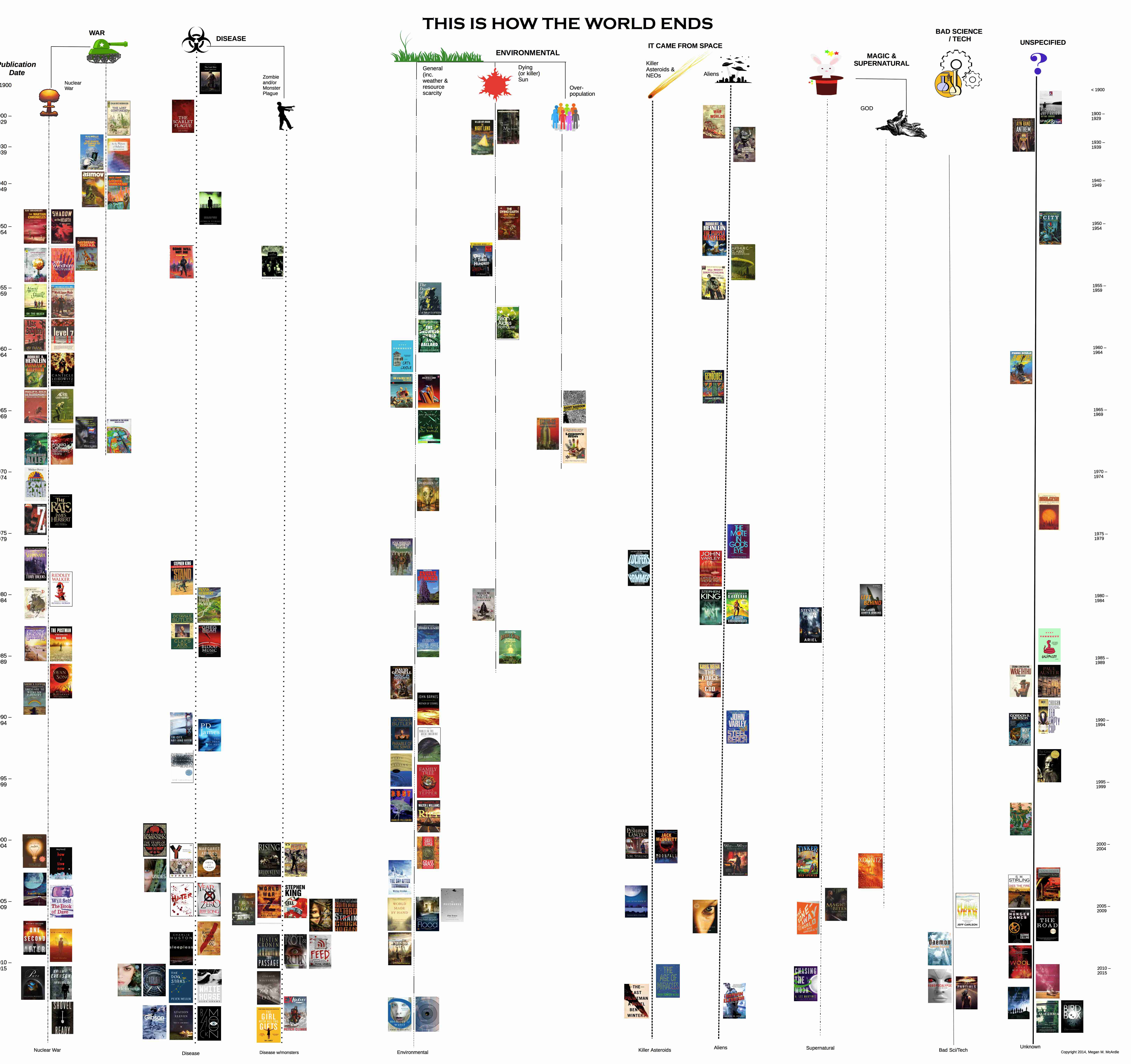