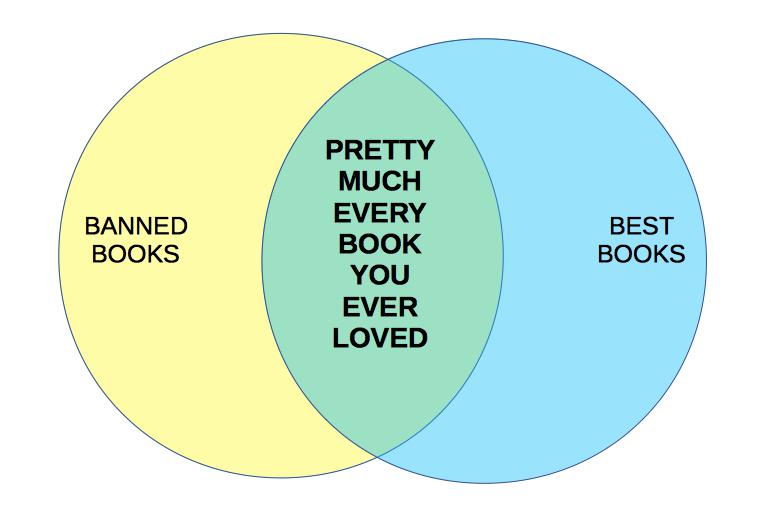 This is one of those things that isn’t true, but feels true. If someone thinks a book is the best book every written, there is someone who wants it banned from schools and libraries.  If there is a book that has been banned, it is someone’s favorite book of all time.

Because it is Banned Books Week, and as I librarian I’ve always loved this annual time when we celebrate the freedom to read, I was checking over the list of most banned and/or challenged books.  ALA has a lot of nice resources on their banned books week site including a list of the 100 books most challenged in the first decade of the 21st century.  In other words, RECENTLY.  And as usual, it makes me so sad that there are so many marvelous books that people want to surpress.  I grew up in a house full of books where I was allowed to read anything I wanted, whether it was appropriate for my age or not.  I WAS NOT HARMED.  I’m a (mostly) well-adjusted functioning member of society.  No book ever hurt me or scarred me. So yeah, I think banning books is just about the most pointless thing a person can do with their time and energy.

I was going to do an infographic of banned books lists compared to best books lists.  I started with a combo list of the Modern Library’s 100 greatest novels, mixed with Time magazine’s list and a few other “best” lists and then pulled that best books list up with the most banned books and looked at the two lists together.  The overlap was ridiculous.  Although I was most interest in the adult titles (and really just the novels), but I’m pretty sure the results would be the same for the children’s books that have been banned, as a brief scan of those shows Newbery winners, ALA notable books, and other “best” books all throughout the list of books that have been banned and challenged.  It would be far, far quicker to list the titles that did NOT make both lists. But really, you don’t need me to highlight the relative mediocrity of Captain Underpants and Fifty Shades of Grey.  I might still do a systematic study one day (maybe for next year’s Banned Books Week), but for now, I decided instead to simply list some of my favorites from the Banned lists. I limited myself to 15 (with a couple of cheats), but really there are so many more.

Read a banned book.  Enjoy your freedom to read.