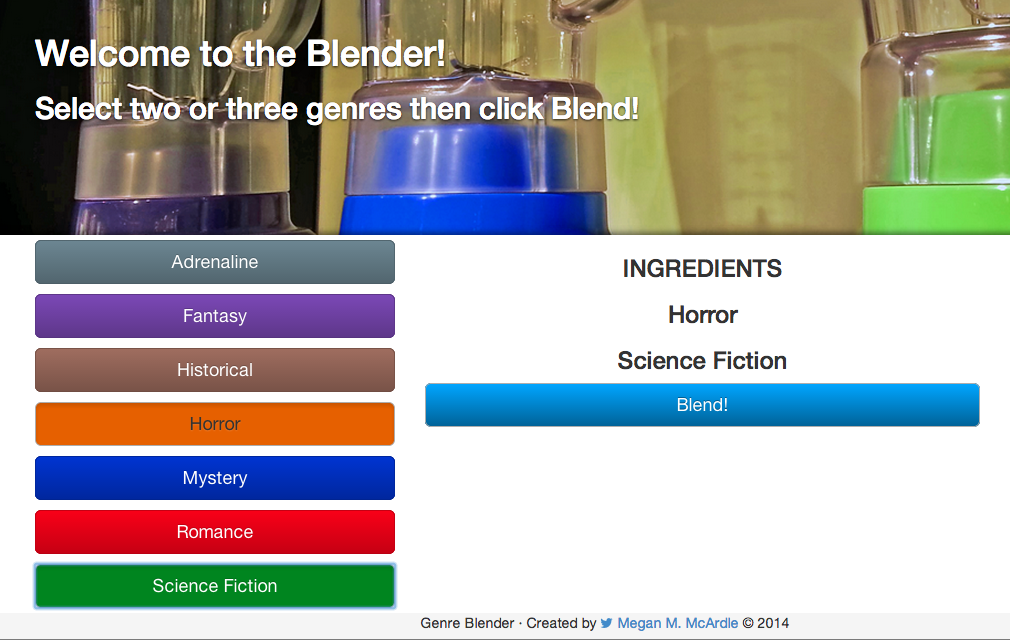 Some folks have asked me where the idea for the Genre Blender came from. A few years ago, I was asked if I wanted to write a volume in a readers’ advisory series of guides from ALA Editions.  Spitballing ideas with the two editors of the series, I decided I would write my guide not on one genre (most of the good ones were taken!), but on books that blend genres.  The book will be out in a month or so, and can be ordered here: Reader’s Advisory Guide to Genre Blends.

Some of my favorite books are more than one tidy genre — they’re messy genre bending purees.  I love how mixing genres together allows new appeal factors to manifest, and can bring new readers to genres they never thought they would read. When I was researching the book, I collected hundreds of possible titles to include — far more than I had room for in the print edition.  Rather than throw the extras in a drawer, I thought it would be fun to make them available on the web.  I envisioned something interactive, where users could pick their genres and find a bigger list of blends than I included in the book. Also, for me the most frustrating thing about any print reference book is how static they are.  Once a book is published, you can’t go back and add a new book even if you want to.  There are new blends being published each and every month (check out my New Releases posts if you doubt me). The blender allows me to add titles that I think are great examples of a blend as they come out, as well as beefing up categories with older titles. Even though there are hundreds of titles in the database, it is not meant to be comprehensive.  Some blends like historical mysteries are so popular there are probably many hundreds of books in print.  I merely collected what I thought were some good examples of the blend. Lots are personal favorites, or touchstones of the genre.

I sketched out designs that had siding bars and pie charts and various other ways to give people an idea of how MUCH of any genre is in a book — is it just a touch of romance  in an SF blend? Or are they banging on every surface of the starship?  But for simplicity, I went with a visual representation of a little (lowercase) or a LOT (in caps).  It’s a personal call, though, so your mileage may vary.  I also decided to limit initial searching to 2-3 genres in a blend. There are blended books with more (I think I have a couple of titles with 5 genres!) but this way you never get zero results back. I’m so lucky to have an expert computer guy and coder in the house, as he was able to make the Genre Blender actually work.

I’m really pleased that the blender seems to be getting used by readers and librarians. In the two months since it has gone live, over 1500 blends were created using the tool. That’s amazing! This week new users of the Genre Blender should notice some improvements.  I’ve added a bunch of new titles, bringing the database to over 500 entries.  We’ve also tweaked the code and the architecture to hopefully have the results load more quickly. There is also now a “Contact Us” link on both the blog and the Blender (click on “About”).  In the next week or so the covers will be hosted locally rather than being served by Amazon. Although I am an Amazon affiliate (as well as an IndieBound affiliate) they were having issues with their servers that they refused to admit were a problem at their end, so we’ll be avoiding that problem in the future.  As I said at the top, it’s a work in progress.  Happy blending!